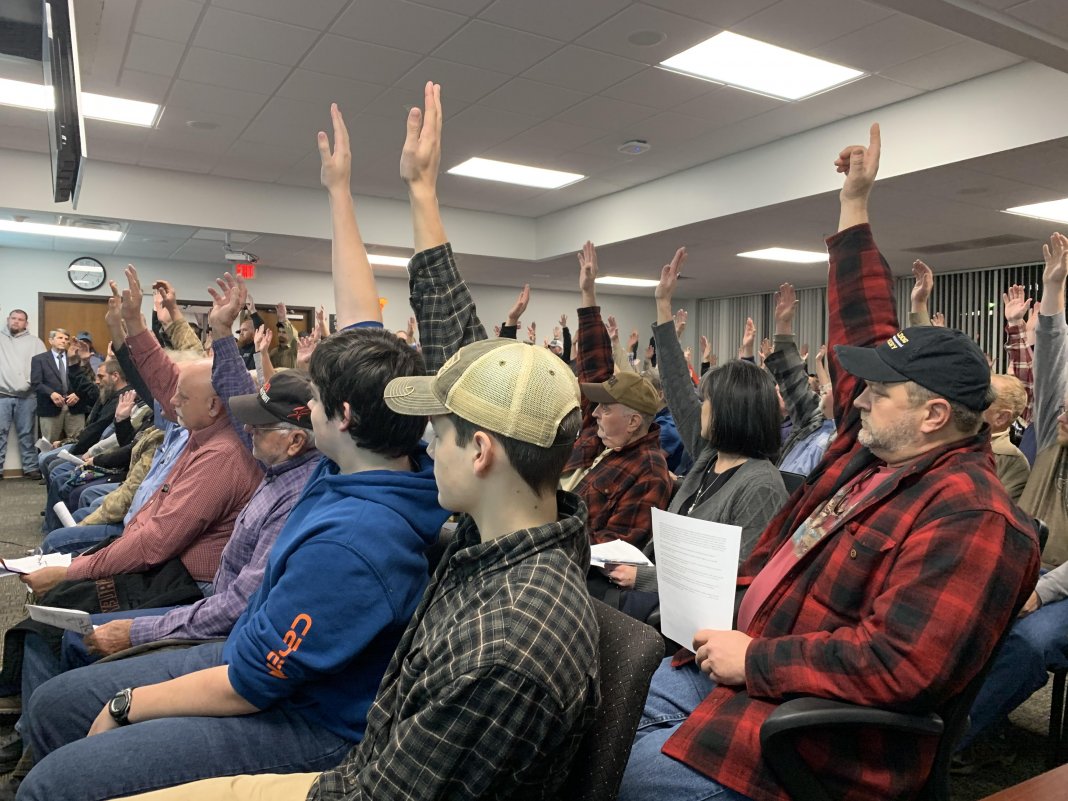 Democrats in Virginia now hold unified control of state government for the first time since 1993 after making big gains in the 2017 and 2019 elections. Part of that success they attribute to promising to deliver what they call common-sense gun legislation.

Polls released after the 2019 legislative elections, in which Democrats captured the House of Delegates and Senate, showed that gun violence prevention was in fact the top issue for voters.

However, the Republican losses, along with Democrats filing the actual bills that will tighten gun laws, has motivated gun activists to mobilize. These efforts are being spearheaded by the Virginia Citizens Defense League, a group that says it is “dedicated to advancing the rights of Virginians to keep and bear arms pursuant to the Second Amendment.”

They have enacted a sweeping campaign to pressure elected officials in localities across Virginia to declare themselves “Second Amendment sanctuaries.”

Scores of localities have passed some form of the measure, according to the VCDL. Gun rights supporters haven’t been shy, showing up at local government meetings by the hundreds to try influence local officials.

Meetings in Virginia Beach and Prince George and Prince William counties were a testament to the ability of the gun groups to mobilize, with crowds filling up the overflow rooms and spilling outside. Seeing the movement unfold, some Republicans are beginning to feel flickers of optimism that they finally have a message to rally around and counter Democratic momentum heading into 2020.

“Finally the Democrats have touched on an issue where Republicans are entirely unwilling to compromise,” said Shaun Kenney, former executive director of the Republican Party of Virginia. “If Virginia wasn’t in play for Trump before, it is now.”

Not everyone sees it that way. Virginia has not voted for a Republican presidential candidate since 2004, and a Republican has not won a statewide election in Virginia since 2009 when Bob McDonnell beat Creigh Deeds in the race for governor.

Stephen Farnsworth, a professor of political science at the University of Mary Washington, says it’s a reach to claim that gun control could reshape the 2020 elections in Virginia, with races for president, U.S. Senate and House of Representatives on the ballot. Farnsworth says that the two biggest factors that will influence the presidential race will be the shape of the economy and who the Democrats nominate.

“It is important to remember that people tend to blame politicians who vote for a particular measure,” said Farnsworth. “(U.S. Rep. Abigail) Spanberger is not going to be voting on gun control measures at the state level. Individual lawmakers who vote for or against certain measures may be vulnerable in their own re-elections, two years from now.”

Some Democratic operatives and potential candidates who spoke on the condition of anonymity said they are concerned that leadership might overreach on guns, creating a backlash that will be hard to combat on the campaign trail in the years to come.

In meantime, groups who have been advocating for gun safety are urging legislators to move forward effectively by using evidence-based ideas.

“We need to be sure all Virginians have a seat at the table and that all voices are heard,” said Robyn Sordelett, a local lead for Moms Demand Action, a group founded after the Sandy Hook massacre. “In particular, that means engaging with rural Dems and their constituents. This isn’t about moderation — the people spoke loud and clear about their commitment to gun safety in the election. It’s about looking at what legislation has the best outcomes in other states so that we can enact evidence-based gun safety measures.”

‘We are not the problem’

With a presidential and congressional election coming in November, U.S. Reps. Elaine Luria of Norfolk and Abigail Spanberger of Henrico — both Democrats elected to their first term in 2017 by narrow margins in swing districts — could feel the first effects of the electorate’s response to gun control legislation.

Spanberger, the former CIA operative who upset Republican Dave Brat in 2018, represents a largely rural district that also includes Richmond’s suburbs and was formerly reliably Republican. Spanberger ran up the score in Henrico and Chesterfield to make up for the rural parts of the district that voted almost entirely for Brat.

Henrico, the heaviest Democratic stronghold of her district, voted to approve a sanctuary-like resolution after the board originally stated it was not going to address the issue at a previous meeting. However, pressure from pro-gun groups convinced Republican Pat O’Bannon to introduce the resolution asking all members of the board to swear to uphold the Constitution.

Activists from a group called Together We Will-Henrico, quickly responded with a petition stating the move by O’Bannon was an “act of political theater to placate a push by the  (VCDL) to make Henrico a 2A sanctuary city. TWWH would like to remind Ms. O’Bannon that all counties in Virginia must uphold all state and federal laws, not only the ones they personally agree with.”

Philip Van Cleave, the VCDL president, has vowed to oppose any new gun measures. “Other than bills that only affect criminals, any gun control the Democrats pass, they will own. Any Republicans that help them, are going to own that gun control, too. It matters not if the person voting to enslave us is a Democrat or a Republican.”

“We consider this a war on gun runners,” said Van Cleave in Chesterfield earlier this month. “We are not the problem, but they’re aimed at us.”

Some of Spanberger’s potential Republican opponents saw an opportunity at a meeting of the Chesterfield County Board of Supervisors meeting earlier this month, when pro-gun attendees unsuccessfully pushed for a sanctuary declaration. Among them: Del. Nick Freitas, R-Culpeper, Del. John McGuire R-Goochland and state Sen. Amanda Chase, R-Chesterfield.

Chase, speaking in front of the building on the steps before the event told the crowd “this is all about sending a message to a governor.”

Freitas, who recently announced his run for Spanberger’s 7th Congressional District seat, was front and center in the auditorium as the Chesterfield Board was chastised by the crowd for not allowing a vote on the resolution.

“We are seeing thousands of Virginians across the commonwealth packing into board of supervisors meetings and standing out in the cold to fight for their constitutional rights,” Freitas said, calling out Spanberger and implying she has not spoken in support of the Second Amendment.

“Conservatives organizing like this is definitely good for conservative candidates’ chances in the future in Virginia and the silence from Democrats like Abigail Spanberger on these fundamental issues is deafening. The voters won’t forget about their silence come Election Day in 2020.”

During the Chesterfield meeting, supporters of gun violence prevention legislation tried to speak over boos and yelling from the crowd. Supervisor Leslie Haley, a Republican, tried to maintain order but she was also shouted down, with members of the crowd referring to her as Nancy Pelosi.

Emily Hartman, a Midlothian resident who spoke before the board noted the risk of a loss of state funding if they enacted the sanctuary resolution. “Chesterfield receives $141 million dollars of state tax revenues annually. These millions are our share of taxes we paid into state coffers. These tax dollars make up 17% of our county’s overall revenue. Does our board risk losing our own tax dollars to fund our schools, to build roads, to produce agriculture and to protect citizens from gun violence?“

A 63-year-old Chesterfield resident who attended said he felt he had to stand up for his rights. “Extreme-risk laws and confiscation are not the answer,” said the man, who identified himself only as Dave. He was sure the gun backlash will help Republicans in Virginia in 2020. “Are you kidding me?” he said. “This just goes to show what happens to the world when Democrats have power.”

‘This why Republicans continue to lose’

In Virginia Beach, former GOP Congressman Scott Taylor, who was running against Democratic Sen. Mark Warner but may instead seek to reclaim his old seat from Luria this fall, didn’t miss the chance to get in front of the pro-gun crowd trying to pressure Virginia Beach into adopting a sanctuary measure.

“I guarantee you there are Republicans, independents, Democrats, people who aren’t politically active but want to protect their families and their property, and that is why they are here and you are seeing this across the commonwealth,” Taylor said, according to WTKR.

Farnsworth, however, says the polls aren’t with Republicans. “20 years ago, Democrats said almost nothing about guns because it was a political loser for a Democrat to talk about gun control. In today’s Virginia, polls show that talking about gun control is an asset to a Democratic candidate, not a detriment.”

One GOP consultant said on the condition of anonymity that the sanctuary push will be the end of the gun movement in Virginia. “This is why Republicans continue to lose middle class and suburban voters.”

The Wason for Public Policy released a poll earlier this month showing that 86% of Virginians support background checks on all gun sales while 73% supports red-flag laws. However, the numbers did drop significantly to 54% in support of an assault weapon ban.

“Republicans tried to make the state elections in 2019 a referendum on gun control, at least in some key swing districts,” said Farnsworth. “By shutting down the special session in less than two hours, they created at least as much of a target on their backs as the did on the backs of Democrats.”

Democrats flipped three seats in the House of Representatives in 2017. But Spanberger and Elaine Luria each won by less than 2 points. Luria and Spanberger are not involved in the gun control legislation at the state level whatsoever, but as partisan politics in D.C. continues to heat up over impeachment proceedings, Virginia’s Democratic delegation can expect to hear it on both fronts from their Republican counterparts on the campaign trail this year.

Tina Ramirez, one of the many Republican candidates looking to unseat Spanberger in November attended a meeting in Goochland earlier this month. “Tina supports 2nd Amendment Sanctuary Cities and spoke last week in favor of them at the Goochland County board of supervisor’s meeting.” Said Cindy Horne, a spokesperson for Ramirez. “Tina believes that we have the Second Amendment for a very important reason, to protect ourselves and our families, and that’s a right the government should never take away from us.”

Despite the backlash across the state from the gun activists, Democrats say they are going to continue to forge ahead with their plans for gun control legislation, noting that the majority of the commonwealth voted for them to do this exact thing.

“Virginians across the commonwealth on Nov. 5 voted for Democrats who ran on a gun violence prevention platform.” said Del. Schuyler VanValkenburg, D-Henrico. “I’m confident that we will enact the responsible, common sense policies most Virginians have demanded and that will make our schools and public spaces safer.”