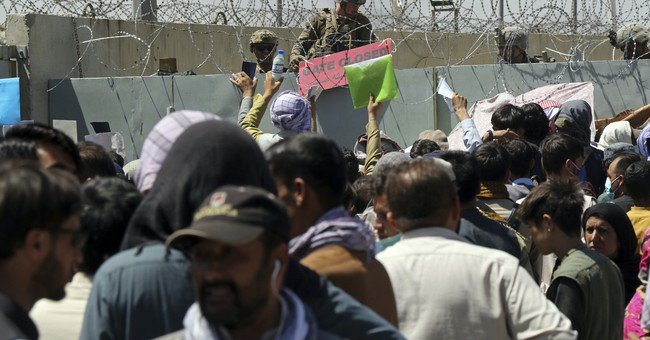 When it comes to President Joe Biden’s mishandling of the withdrawal from Afghanistan, congressional candidate for the 7th district of Virginia Tina Ramirez told Townhall that these past two weeks have motivated her even more so to run. She’s running as a Republican to unseat incumbent Rep. Abigail Spanberger (D-VA), whose responses to the withdrawal Ramirez finds particularly lacking.

Ramirez’s work to do with international religious freedom has brought her to many nations around the world. Seeing firsthand what terrorist groups do to young women, such as ISIS’ female victims in Iraq and Afghanistan, Ramirez is certain the Taliban will continue to mistreating the women of Afghanistan. She phrased it as a not if, but when situation.

She called it “just absurd” for “our government to have literally handed the keys over in a reckless manner, that was completely unnecessary, to the Taliban, to reverse 20 years of progress that we’ve made on human rights and on women’s rights in Afghanistan.”

Ramirez was more than willing to call out those so-called champions of women’s rights who fail to call out the Biden administration. “Where’s the Women’s March or the Me Too Movement for the women of Afghanistan right now,” she questioned.

There’s also the example Ramirez offered of an American woman and her young daughter she spoke to, who were only able to get through to the airport and to another country because the woman’s Afghan husband helped them push through the crowds. Ramirez wanted to know where women’s rights groups were for them.

Townhall has covered the assurances the Biden administration has given when it comes to expecting the Taliban to do right by people, which amounts to an international statement headed by the United States. Sec. of State Antony Blinken spoke to that during his Sunday appearance on “Meet the Press”:

..We have more than 100 countries, 114 countries who signed onto a statement we initiated making clear the international community expects the Taliban to make good on a commitment to let people continue to leave the country after August 31st. That freedom of travel is essential to the international community’s expectations of the Taliban going forward. And working with other countries very closely, we’re going to make sure that we put in place the means to do that…

Nothing has been promised to the Taliban. To the contrary, we have made very clear, and not just us, country upon country around the world have made clear that there are very significant expectations of the Taliban going forward if they’re going to have any kind of relationship with the rest of the world. Starting with freedom of travel, but then going on to making sure that they’re sustaining the basic rights of their people, including women and girls, making sure that they’re making good on commitments they’ve repeatedly made on counterterrorism and having some inclusivity in governance.

Ramirez dismissed the idea as “a joke” that the Taliban could be trusted on the world stage, including to allow for freedom of travel, when they’re the ones preventing people from getting to the airport.

The candidate took other issues with the administration as well as her opponent, criticizing them for “constantly leading from behind” and declaring “we need better leadership.”

Ramirez called White House Press Secretary Jen Psaki’s framing of the issue “really offensive to a lot of people” when it comes to placing the blame on people who want to leave Afghanistan but can’t.

She also referred to the president’s press conference last Thursday as “an absolute disaster,” with Biden being someone who was “incoherent and incompetent,” and “who blames the former president, instead of actually taking full responsibility for the fact that he didn’t have a plan, he didn’t communicate the plan, and he used the State Department versus the military.”

That Spanberger previously worked for the CIA as an operations officer, and even worked on projects that involved intel gathering on issues like terrorism is not insignificant.

While the congresswoman has tweeted out offers of assistance for those in Afghanistan seeking it, she has not so much taken a stance on the failures necessitating people needing such assistance.

Ramirez directed Townhall to a statement Rep. Spanberger and Rep. Anthony Gonzalez (R-OH) brought to the Problems Solvers Caucus, which was ultimately endorsed:

“As Democrats and Republicans, we stand united in our commitment to protecting U.S. citizens, diplomats, intelligence officers, and our foreign partners who are currently attempting to flee Afghanistan. In this time of tremendous danger, politics must be put aside to advance our common goals. From this week’s bipartisan Member briefing, it is apparent that the Administration’s set date for departure from Afghanistan on August 31st does not provide enough time to evacuate all American citizens and our partners. We respectfully call on the Administration to reconsider its timeline and provide a clear plan to Congress that will result in the completion of our shared national objectives.”

Ramirez referred to the statement as “a very generic response” and one which “did nothing to hold Biden accountable for this debacle.”