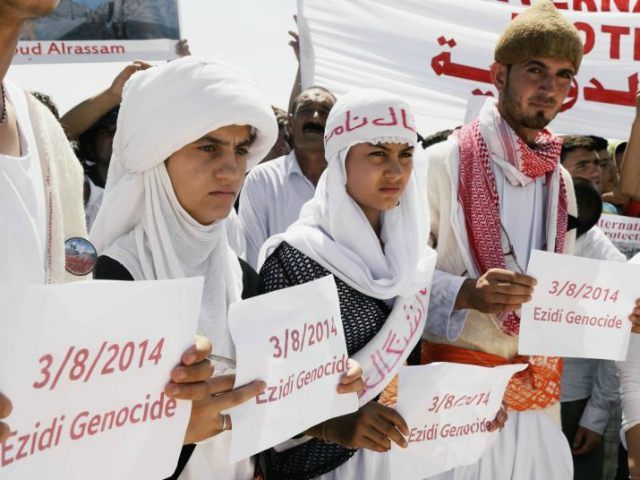 Today, in modern Iraq and Syria, thousands of women and girls are bought and sold for a few dollars, then drugged, tortured, and raped – all because of their religious identity.
Like Nobel Peace Prize winner Nadia Murad, another Yazidi girl named “Bazi” was sold into sexual slavery and abuse by the Islamic State – but she claims that her tormentor, who purchased her for $40, was an American fighting for the terrorist group. In 2015, Hardwired helped Bazi share her story with the U.S. Congress, which led to legislation to prosecute Americans involved in this horrific slave trade of women.

If this were happening in our own neighborhoods, to our own daughters or sisters, we would be outraged. Perhaps we would even march and protest to stop it.

That is why in late 2016 Hardwired launched the “Brave Ones” campaign – to honor the courage of the women and children who escaped from ISIS by providing them, for the first time, booklets with information about their rights and the tools to fight for the freedoms we take for granted every day.

If we can protest about unequal pay, contraception, and abortion, surely we can stand against the sexual enslavement and trafficking of an entire ancient religious community at the hands of Americans.

Since August 2014, ISIS has enslaved nearly 6,000 Yazidi women and children; nearly 3,000 remain in captivity and 2,780 have escaped. They are living in camps where they don’t even have the most basic necessities that we take for granted including food and health care.

But the silence of the so-called “Women’s Rights Movement” is deafening.

If these women and children could be bought and sold for less than $40 then surely we can invest as much in their freedom and recovery. Through the Brave Ones campaign, Hardwired has already distributed over a thousand booklets to the survivors and is training teachers who will work with them every day to defend their rights.

These Brave Ones are not alone. They represent some of the 1.7 billion women facing oppression because of their religion and gender, by both religious and secular systems, in the 20 worst countries where religious freedom is violated in the world today.

The State Department estimates that over 300 Americans have joined ISIS and many of them victimize these women and girls. Jihadists sexually abuse these girls multiple times a day and each time, justify their actions in the name of religion. They tell the young Yazidi women that they are infidels, devil worshippers, and deserve to be raped and abused.

This is not a foreign problem but an American one, too – one that American feminists should champion as they would their own causes.

As Americans with a long tradition of religious freedom and women’s rights, we have a special role to play in advancing the rights of women globally.

After meeting “Bazi” at a Hardwired event one women’s rights advocate, Kathy Ireland, endorsed the campaign, stating, “By joining Brave Ones, we become points of inspiration and we’re able to save lives.”

The Yazidi women and children of northern Iraq deserve their dignity and their freedom. As Americans, whose fellow countrymen have engaged in this horror, we have a moral obligation to help these victims.

As a country that holds religious freedom as a sacred human right, we have a message for these girls that they need to hear.

And as individuals concerned about the threat of terrorism, we have a responsibility to stop ISIS and end the recruitment of more Americans who are joining them.

In 2016, the U.S. planned to resettle 40 of the worst victims, but most survivors will never be able to leave. They need immediate help where they are. The young Yazidi women and children who have escaped ISIS have shown immense courage in seeking freedom, but the effects of trauma remain and there are no long-term, mandatory counselors available to them.

Some survivors who became pregnant through rape have tried to commit suicide or abort their babies out of shame and fear. They face significant rates of suicide and even Stockholm Syndrome.

One survivor, Bessema Darwish, was sent to solitary confinement in a terrorist prison to deliver her baby. Instead of freedom and care, the Kurdish security police she went to for protection accused her of converting to Islam and joining ISIS.

Bessema and her daughter did not see the light of day for over a year. Her family and their attorneys are still unable to provide her the care she desperately needs.

The Yazidi people have faced 74 genocides and yet refuse to be treated as victims. Through Brave Ones, Hardwired is teaching these girls, for the first time, that they have rights. It’s how they’re “hardwired” – for freedom. And we’re providing the knowledge required for their society to resist intolerance and violence in the name of religion.

We can send a message to the world that no woman or child deserves to be treated this way and that we will be their advocate by joining Brave Ones. And in doing so we can ensure that our children, the next generation, are not held captive by terrorists that would deny women their rights and their religious freedom.

To us, that’s what the real Women’s Rights Movement is all about.

Feminism is about equality and dignity, freedom and fairness for all, especially the most vulnerable and afflicted across the globe.

So, we have a message to America (especially its women): Don’t forget the forgotten but brave women who are still fighting for their lives, their liberty, and their dignity.